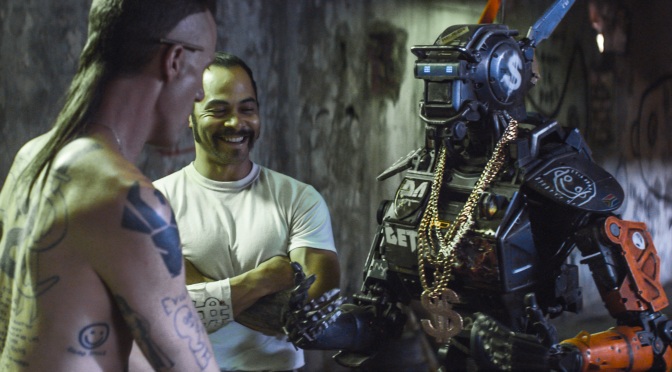 What do you get when you mix hardcore analysis of movie robots and an undeniable urge to keep it gangsta? You get The Last Row Podcast‘s first ever double episode!  The first half is dedicated to the polarizing sci-fi thriller, Chappie, as Drew and Badway break down the 1s and 0s on Die Antwoord and the “Zef” lifestyle, their parenting skills, and the rumor regarding Ninja trying to give Wolverine acting pointers. Other topics include: the career progression of Neill Blomkamp and the unfair comparison to that Shyamalamalan guy, Hugh Jackman’s mullet, and what Drew would do with his own personal Chappie. Then, be sure to stay tuned to part two where the guys unveil the official Last Row(BOT) Rankings, as they rank the top ten movie robots, scoring them based on five categories: Strength, Intelligence, Wit, Human Trust, and Beauty.

This site uses Akismet to reduce spam. Learn how your comment data is processed.

Since we were talking about the #philadelphiaeagles in our #invinciblemovie episode, we had to add Jerry Jones to our Last Row Villain Card Collection! #gobirds🦅
NEW EP! The Last Row Podcast celebrates football season by getting Invincible with Mark Wahlberg a.k.a. Vince Papale. Drew and Badway discuss the differences between the biopic dramatizations and the real life story, search for Wahlberg’s Philly accent, and spend 20+ minutes on Papale’s wife, who got 2 minutes of actual movie screen time, breaking down her all-time undressing of her soon to be ex-husband. The guys also identify which sports and jobs they could “walk on” to, bash biopics as a whole, and equate Rami Malek’s performance as Freddy Mercury to completing a brilliant paint-by-numbers drawing.
Coming to you this Thursday...
Happy #BatmanDay2022! Who is your favorite live action #Batman? (D: Kevin Conroy will always be my absolute favorite overall!)
Weekend vibes
Welcoming Coach Jack Reilly from The Mighty Ducks (1992) to our Last Row Villain Card collection!

Note: We may earn a small commission from qualifying purchases through our Amazon or Apple affiliate links